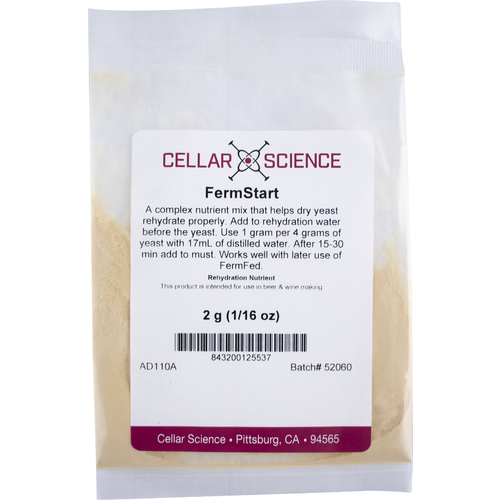 FermStart Yeast Rehydration Nutrient
Description
Start your fermentation right with FermStart by CellarScience™.  FermStart is a concentrated, micronutrient blend that helps yeast during the critical phase in which they transition from dried and dormant back into healthy and active.  FermStart is added to your rehydration water so that your yeast absorbs the nutrients as they absorb the water.  Rehydrating with FermStart prior to pitching your yeast also has the added benefit of allowing the yeast access to the nutrients before wild yeast in the must can uptake them.
Rehydrating with FermStart = Healthy Yeast
Rehydrating your yeast is always recommended but is considered especially important at any Brix level above 14.  Rehydrating with FermStart is the gold level of hydration and helps protect your yeast against initial osmotic pressures, competition from wild yeast, and alcohol toxicity.  Proper hydration and healthy yeast have also shown to have a positive impact on flavor.
The Science of How it Works
FermStart is rich in readily assimilable amino acids, sterols, vitamins, and natural glutathione.  Readily assimilable means that the size of the molecules present in FermStart are all extremely small and easily absorbed by the yeast cell. This is obtained by centrifuge and allows FermStart to be extremely concentrated and not contain filler.
The availability of readily assimilable amino acids allows the yeast cell to skip the step in which amino acids would be synthesized within the cell. This saved energy is instead directed into multiplication. Faster yeast cell multiplication means a faster fermentation start, allowing your yeast to out-compete wild yeast. Wild yeast have unknown flavors and fermentation behavior, so it is important to give your selected yeast the best chance to dominate the fermentation.
Sterols help the cell membrane regain and maintain elasticity helping to ensure a perfect start and continued performance throughout the fermentation. The strong cell membrane helps ensure that the yeast can survive and complete alcoholic fermentation under tough conditions.
Glutathione is a very special natural antioxidant and detoxifier made up of three amino acids – cysteine, glutamate, and glycine.  It is extremely important for maintaining intracellular health by preventing damage to cellular components during the very oxidative process of rehydration.
FermStart does not contain nitrogen which is detrimental to the yeast cell during hydration. Nitrogen can be added through the addition of FermFed or FermFed DAP free nutrients at the first signs of fermentation.  Another addition is then added at 1/3 sugar depletion to complete a total fermentation nutrient schedule.
How Much?
FermStart is a super concentrated formula, which is very convenient when you are rehydrating large amounts of yeast.  Use 1 gram of FermStart for every 4 grams of yeast.  We offer some suggested ranges for the amount of water to use below.
Examples:
8g yeast – Add 2g FermStart to 30-50ml of water
80g yeast – Add 20g FermStart to 300-400ml of water
500g yeast – Add 125g FermStart to 1500-2000ml of water

For a full yeast nutritional plan, use FermStart when rehydrating your yeast, FermFed DAP Free at the onset of fermentation, and FermFed after 1/3 sugar depletion.